Meeting the President of Ireland

It was a pleasure Meeting President of Ireland, Michael D Higgins, at the TUC, London on Friday 14th October 2016.

He was giving a lecture on Eva Gore-Booth the committed suffragist, social worker, labour activist and sister of Countess Markievicz, who herself was a suffragette taking part in the 1916 Easter Rising and 2 years later becoming the first woman elected to the British House of Commons, though she did not take her seat.

It was totally inspiring hearing about Eva and afterwards I was introduced to the Irish President himself –  and gave this exceptional and inspiring academic leader a big hug! 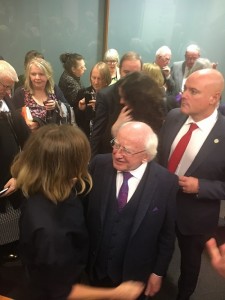 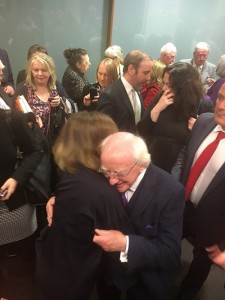 My thanks to the Irish Ambassador, Dan Mulhall, and his wife, Greta, for inviting us along to this mighty celebration.

Dan and Greta were guests of ours at the Good Life Experience 2016 and, being a passionate exponent of poetry, Ambassador Dan gave thrilled festival goers a talk on poet WB Yeats on his 150th anniversary in 2015. He then ended his festival visit in an unforgettably swashbuckling way by leading us through some of the greatest songs in the Irish repertoire, and there are many !!

An inspirational week that wasn’t over yet because, just a few days later, Mister and I were at another lecture…